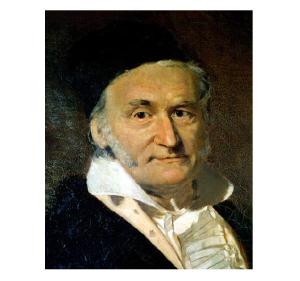 , the “Prince of Mathematicians”, who was born on April 30, 1777.  In honor of Gauss’s 238th birthday, I thought I would blog about one of Gauss’s favorite theorems — the Law of Quadratic Reciprocity — and its relation to the sign of the quadratic Gauss sum, which we will determine using the Discrete Fourier Transform.  Our exposition mostly follows this paper by Ram Murty.  Regarding the sign of the quadratic Gauss sum, Gauss conjectured the correct answer in his diary in May 1801, but it took more than four years until he was able to find a proof in August 1805. Gauss wrote to his friend W. Olbers that seldom had a week passed for four years that he had not tried in vain to prove his conjecture.  Then:

Finally, two days ago, I succeeded – not on account of my hard efforts, but by the grace of the Lord. Like a sudden flash of lightning, the riddle was solved. I am unable to say what was the conducting thread that connected what I previously knew with what made my success possible.