I want to explain a beautiful proof of the Law of Quadratic Reciprocity from c. 1874 due to Egor Ivanovich Zolotarev (1847-1878). Some time ago I reformulated Zolotarev’s argument (as presented here) in terms of dealing cards and I posted a little note about it on my web page. After reading my write-up (which was unfortunately opaque in a couple of spots), Jerry Shurman was inspired to rework the argument and he came up with this elegant formulation which I think may be a “proof from the book”.  The following exposition is my own take on Jerry’s argument.  The proof requires some basic facts about permutations, all of which are proved in this handout.

be odd relatively prime positive integers.  You have a stack of

and you want to deal them onto the table in an

rectangular array.  Consider the following three ways of doing this:

) : Deal the cards into rows, going left to right and top to bottom.

): Deal the cards into columns, going top to bottom and left to right.

): Deal the cards diagonally down and to the right, wrapping around from bottom to top or right to left whenever necessary. 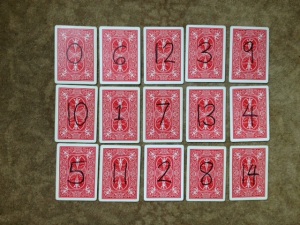 There are corresponding actions which undo the above deals, which we will denote by Row pickup (

). Note that in a pickup move each successive card is placed under the previous one.

We combine these basic moves as follows, obtaining three different permutations of the rectangular array which we denote by

is a row pickup followed by a diagonal deal.

is a column pickup followed by a diagonal deal.

is a row pickup followed by a column deal.

For later use, we note that

permutes each column separately and

permutes each row separately.  (Try it with actual cards and you will easily convince yourself of this!)

It is clear that

is the same as doing

.  Since the sign of a permutation is a homomorphism, we have

.  Believe it or not, this self-evident observation is the Law of Quadratic Reciprocity in disguise!

induced by multiplication by

, which we write as

From these two claims, we obtain:

The connection with Quadratic Reciprocity is via:

is an odd prime and

is a positive integer not divisible by

The Law of Quadratic Reciprocity: If

are distinct odd primes, then

We now explain how to prove the two claims, as well as Zolotarev’s Lemma.  For the explanation, it is helpful to identify the initial stack of cards with the set of integers

.  Also, by indexing the rows of the array by

and the columns by

, we can identify the array with the set

.  In this way we can identify

with the following maps from

Proof of Claim 1: By the above formulas we have

is the product of the

is a composition of multiplication by

since it’s either trivial or a product of

cycles, each of length

, and we’re assuming that

is odd as well, we obtain the claim about

, and the corresponding assertion for

of a totally ordered finite set is equal to

to the number of inversions of

. (An inversion is a pair

.)  We put the column-major order (the order depicted in the second figure above) on our array.  Note that for

in column-major order if and only if

in row-major order (the order depicted in the first figure above).  So

is below and to the left of

.  The number of such inversion pairs is

, since each pair of 2-element subsets

gives rise to a unique inversion (by ordering the elements

).  The claim follows since

are assumed to be odd.  (Note that we do not require

to be relatively prime for this argument.)

be a primitive root modulo

.  Then the permutation of

given by multiplication by

.  The latter is a product of

cycles, each of length

is also even, and if

is odd then since

must be even and hence

is odd.  Note also that

is even if and only if

is even.  It follows that

is even, which happens if and only if

is also easily deduced from Zolotarev’s Lemma, which shows that

to the number of inversions of multiplication by 2 modulo

gets inverted if and only if

.  Thus the number of inversions is

, which by inspection is even if

is congruent to 1 or 7 modulo 8 and odd otherwise.

3) If we identify the set

is just the canonical ring isomorphism from

afforded by the Chinese Remainder Theorem.

4) An alternative, more algebraic argument, for Claim 2 is as follows.  Since the bijection

of the array with the permutation

of the totally ordered set

, it suffices to compute the number of inversions of

we see that inversions of

.  The latter two conditions together are easily seen to be equivalent to

5) A more group-theoretic proof of Zolotarev’s Lemma is as follows.  We observe that

is a surjective homomorphism from

; surjectivity follows from the fact that if

is a primitive root mod

(i.e., a cyclic generator of

-cycle and thus has signature

is therefore a subgroup of

of index 2, but the only such subgroup is the group of quadratic residues.  Thus

coincides with the Legendre symbol

6) Zolotarev’s Lemma generalizes to the statement that if

is equal to the Jacobi symbol

, and the proof above then gives quadratic reciprocity for the Jacobi symbol (which is used for rapid computation of Legendre symbols).  Note that in general

is prime these coincide.