Yesterday marked the second anniversary of my blog, and today is the 239th birthday of the U.S. In celebration of Independence Day, I want to explain what matroids are. Matroids were invented by Hassler Whitney (and independently by Takeo Nakasawa) to abstract the notion of linear independence from vector spaces to a much more general setting that includes acyclicity in graphs. Other pioneering early work on matroids was done by Garrett Birkhoff and Saunders MacLane. Matroid theory is a rich subject about which we will only scratch the surface here. In particular, there are many different (“cryptomorphic“) ways to present the matroid axioms which all turn out to be (non-obviously) equivalent to one another. We will focus on just a couple of ways of looking at matroids, emphasizing their connections to tropical geometry.

We begin with the independence point of view, which in many ways is the most intuitive one (not to mention the most appropriate for the Fourth of July).

(called the ground set of

) together with a collection

are independent sets with

A maximal independent set is called a basis. The augmentation axiom implies that any two bases of

have the same cardinality; we define the rank of

to be this common cardinality.

which is not independent is called dependent. A circuit in a matroid

is a minimal dependent set. The collection of circuits in a matroid satisfies the following axioms, which can in fact be taken as an alternate definition of a matroid:

are distinct circuits and

, there is a circuit containing

Here are some key examples of matroids:

be a vector space over a field

be a finite subset of

be the collection of all linearly independent subsets of

is a matroid. A matroid of this form is said to be representable over

. If we write the elements of

as the columns of an

(with respect to some ordered basis of

is independent iff the corresponding columns of

are linearly independent over

. We denote this matroid by

be the set of edges of

be the collection of all subsets of

which do not contain a cycle. Then

is a matroid which is representable over every field

. (Matroids with this latter property are called regular.) A basis of

is just a spanning tree of

. An amazing theorem of Whitney says that if

be the projective plane over

(the seven elements of

can be identified with the dots in the picture below). A subset

is one of the 7 lines in the picture (6 straight and one curved). This notion of dependency gives rise to a rank 3 matroid, the Fano matroid, which is representable over

but not over any field of characteristic different from 2. In particular, the Fano matroid is not graphic. 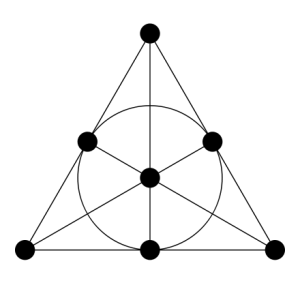 be the polynomial ring in

variables over a field

be a prime ideal of

be the collection of all

is a matroid. A matroid of this form is said to be algebraic over

. (This is not the usual definition, but is equivalent to it.) All representable matroids over

be the 8 vertices of the cuboid shown in the following picture. A subset

is one of the 5 square faces in the picture. This notion of dependency gives rise to a rank 4 matroid, the Vamos matroid, which is not algebraic, so in particular not representable, over any field. 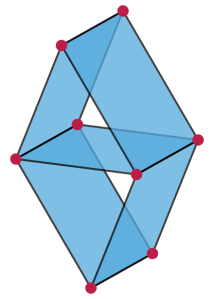 is a matroid, let

be the collection of subsets

. It turns out that

is a matroid, called the dual matroid of

is the matroid associated to a planar graph

is the matroid associated to the planar dual of

. Another amazing theorem of Whitney says that, conversely, if

is a connected graph for which the dual matroid

It is an open problem whether or not the dual of an algebraic matroid is always algebraic.

be a matroid with ground set

to be the set of vectors

such that for any circuit

, the minimum is achieved twice in

. A matroid fan is a subset of

. There is a close connection between matroid fans and tropicalizations of linear spaces over trivially valued fields, as we will now describe.

be a field equipped with a valuation, i.e., a map

A valued field extension of

consisting of a field extension

together with a valuation

extending the given valuation on

the set of valued field extensions of

is an algebraic subvariety, we define the tropicalization of

is the base-change of

One can show that

is the topological closure of

, and such a valued field

By the Bieri-Groves theorem, if

is an algebraic subvariety of

is the support of a rational polyhedral complex of pure dimension

is connected then so is

. If the valuation on

is trivial (meaning that

is the support of a rational polyhedral fan.

be a field. We call a subspace

non-degenerate if it is not contained in any coordinate hyperplane

, one can define an associated rank

by declaring that a subset

The following theorem is a consequence of results of Kapranov and Sturmfels:

is a non-degenerate subspace of

then (with respect to the trivial valuation on

This shows, in particular, that the tropicalization of

depends only on the matroid

A natural way to put a fan structure on

is as follows. For

, we define the initial matroid

to be the matroid on

whose circuits are the minimal sets among

Note that, by definition,

is equal to the set of

has no loops. (A loop is a circuit with one element.) It turns out that the cones

. This fan is balanced, meaning that for each

, the sum of the ray generators of the

The relationship between matroids and tropical geometry is even closer than Theorem 1 would indicate. To state the result, we define a tropical linear fan of dimension

Theorem 2: One can recover a matroid

from the tropical linear fan

. Moreover, every tropical linear fan is the support of

gives a natural bijection between rank

and tropical linear fans of dimension

for some non-degenerate linear subspace

Motivated by Rota’s conjecture that the coefficients of the characteristic polynomial of a matroid form a log-concave sequence, June Huh has asked (see e.g. Section 4.3 of his thesis) whether, given a matroid

and an algebraically closed field

, there always exists an algebraic variety

(not necessarily a linear space!) such that

(as sets). My Georgia Tech colleague Josephine Yu recently proved that the answer is no; more precisely, she shows in this beautiful short paper if

is not algebraic then there is no such variety

. So, for example, the Bergman fan of the Vamos matroid is not the set-theoretic tropicalization of any algebraic variety.

So far we have been working over a trivially valued field

. There is an analogous story which works for arbitrary non-archimedean fields

in which we replace matroids by valuated matroids. The circuit-based definition (due to Murota and Tamura) is as follows.

, and define the support of a vector

A valuated matroid on

It follows from the axioms that a circuit is determined, up to a scalar multiple of

, by its support. In particular, the set of circuits mod

in a valuated matroid is finite.

Every matroid can be enhanced to a valuated matroid, but possibly in many different ways. This is analogous to the fact that every field

can be regarded as a valued field by putting the trivial absolute value on it, but in general there are many different valued field structures on

the underlying matroid of a valuated matroid

is a circuit of

Like ordinary matroids, valuated matroids have duals.  We say that two vectors

, if the minimum is achieved twice in the “tropical dot product”

.  The vectors of minimal support in

.  The underlying matroid of

is the dual of the underlying matroid of

be a valuated matroid. We define the tropical linear space associated to

, to be the tropical convex hull of the circuits of

.
A tropical linear space is a subspace of

for a valuated matroid

. It can be given the structure of a polyhedral complex whose recession fan is

As in the trivially valued case, there is a close relationship between this definition and the tropicalization of linear spaces. If

is a non-archimedean field and

, we can define an associated valuated matroid

satisfies (VC0)-(VC3) is one justification for the definition of a valuated matroid. There are lots of other good justifications. For example, Alex Fink proved the folklore fact that a tropical linear space is the same thing as a balanced polyhedral complex whose recession fan is a tropical linear fan, which is the same as a “tropical cycle of degree 1”.  As another example of why valuated matroids are nice, there is an equivalent definition using tropical Plücker vectors reflecting the fact that, just as linear spaces can be thought of as vectors satisfying the Plücker relations, a valuated matroid can be thought of as a tropical vector satisfying the tropicalization of the Plücker relations.

3. June Huh and Eric Katz use Bergman fans of matroids in order to prove Rota’s conjecture for matroids representable over some field in this paper.   Note that what they call the Bergman fan is a subdivision of what we have called the Bergman fan.  See Section 4.2 of the Maclagan-Sturmfels book for descriptions of both of these fan structures on

4. Bergman fans of matroids are examples of strongly extremal tropical varieties, i.e., pure-dimensional rational polyhedral complexes admitting a unique (up to scalar multiple) set of weights which make them balanced. Strongly extremal tropical varieties play a central role in this paper by Farhad Babaee and June Huh giving a counterexample to the strongly positive Hodge conjecture of Demailly.

6. Just as a smooth manifold is a space which is locally a linear space, it is natural in tropical geometry to define a tropical variety to be smooth if the star of every point is a tropical linear fan (i.e., the Bergman fan of a matroid). This point of view leads, for example, to a tropical analogue of Hodge theory via the Orlik-Solomon algebra of a matroid (see, e.g., Chapter 2 of Kristin Shaw’s thesis).

5 thoughts on “A Celebration of Independence”