A large crowd had gathered in Harvard Square, and I was curious what all the cheering and gasping was about. 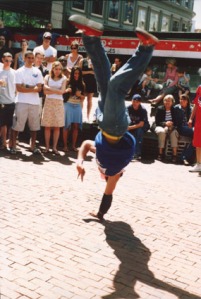 Working my way through the crowd, I saw a street performer who (according to the handwritten red letters on his cardboard sign) went by the name “Zorn the Magnificent”.  He displayed a large orange, borrowed an extremely sharp knife from his assistant, and proceeded to chop the orange into five exotic-looking pieces while standing on one hand.  Working with almost unfathomably deft precision, he rearranged the pieces into two oranges, each the same size as the original one.  The oranges were given out for inspection and the crowd cheered wildly.  I clapped as well — even though I was familiar with the old Banach-Tarski paradox — since it was nevertheless an impressive display of skill and I had never seen it done one-handed before.  I heard a man with a long white beard whisper to the woman next to him “He hides it well, but I know that he’s secretly using the Axiom of Choice.” END_OF_DOCUMENT_TOKEN_TO_BE_REPLACED

In this post I’ll talk about another favorite recreational math puzzle, the (in)famous “Pentagon Problem”.  First, though, I wanted to provide a solution to the Ghost Bugs problem from my last blog post.  The puzzle is the following:

You are given four lines in a plane in general position (no two parallel, no three intersecting in a common point). On each line a ghost bug crawls at some constant velocity (possibly different for each bug). Being ghosts, if two bugs happen to cross paths they just continue crawling through each other uninterrupted.  Suppose that five of the possible six meetings actually happen. Prove that the sixth does as well.

Here is the promised solution.  The idea (like in Einstein’s theory of general relativity) is to add an extra dimension corresponding to time.  We thus lift the problem out of the page and replace the four lines by the graph of the bugs’ positions as a function of time.  Since each bug travels at a constant speed, each of the four resulting graphs

is a straight line.  By construction, two lines

intersect if and only if the corresponding bugs cross paths.

Suppose that every pair of bugs cross paths except possibly for bugs 3 and 4.  Then the lines

each intersect one another (in distinct points) and therefore they lie in a common plane.  Since line

in distinct points, it must lie in the same plane.  The line

cannot be parallel to

, since their projections to the page (corresponding to forgetting the time dimension) intersect.  Thus

must intersect, which means that bugs 3 and 4 do indeed cross paths.

Cool, huh?  As I mentioned in my last post, I can still vividly remember how I felt in the AHA! moment when I discovered this solution more than 15 years ago.

END_OF_DOCUMENT_TOKEN_TO_BE_REPLACED

I just moved into a new house and haven’t had time to blog much lately.  But I did want to advertise my friend Manya Raman-Sundström’s upcoming Workshop on Beauty and Explanation in Mathematics at Umeå University in Sweden: http://mathbeauty.wordpress.com/wbem/

The list of invited speakers includes Hendrik Lenstra, one of my graduate school teachers.  (If you haven’t see it before, you should check out Lenstra’s lovely short article Profinite Fibonacci Numbers.) END_OF_DOCUMENT_TOKEN_TO_BE_REPLACED