In January 2016, my colleague Josephine Yu and I are organizing a workshop called Hodge Theory in Combinatorics. The goal of the workshop is to present the recent proof of a 50-year-old conjecture of Rota by Karim Adiprasito, June Huh, and Eric Katz. In this post, I want to explain what the conjecture says and give a brief outline of its marvelous proof. I will follow rather closely this paper by Adiprasito-Huh-Katz (henceforth referred to as [AHK]) as well as these slides from a talk by June Huh.

is a finite graph, a proper coloring of

colors is a function

from the vertices of

. Whitney proved in 1932 that the function

giving the number of proper colorings of

colors is a polynomial in

, called the chromatic polynomial of

. (The celebrated four-color theorem asserts that if

Read conjectured in 1968 that for any graph

. Read’s conjecture was proved by June Huh in a 2012 JAMS paper using methods from algebraic geometry.

A recursive algorithm for computing

makes use of the observation that

contracted. This identity also yields a simple inductive proof that

is indeed a polynomial.

is a vector space over an arbitrary field and

is a finite set of vectors in

to be the number of independent subsets of

is the set of all non-zero vectors in

(corresponding to the Fano matroid), we have

Welsh conjectured in 1969 that

is always a log-concave sequence. Welsh’s conjecture was proved by Lenz, who reduced it to the main theorem in the 2012 Mathematische Annalen paper of Huh and Katz, which itself built on the prior work of Huh. 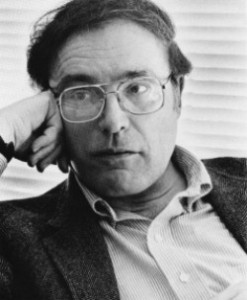 Gian-Carlo Rota noticed that there is a common generalization,in the context of matroids,of the chromatic polynomial of a graph and (a close cousin to) the sequence

above. I gave an introduction to matroids in this blog post, characterizing them in terms of independent subsets and circuits. For the purposes of the present exposition, it will be convenient to present the following two alternative axiomatizations in terms of rank functions and flats.

together with a function

to the non-negative integers, called the rank function of

together with a collection

, there is a unique minimal (with respect to inclusion)

The connection with the independence axioms discussed in my earlier blog post is (briefly) as follows. The rank of a subset

is the cardinality of the largest independent subset of

is a flat of

is defined to be

, i.e., the rank of the largest maximal independent set in

. The corank of a subset

Characteristic polynomial of a matroid

An equivalent but more useful definition is

is the Möbius function of the poset of flats of

. (Alternatively, one can define

Rota made the following conjecture in 1964:

Conjecture: The absolute values of the coefficients of

This is the main theorem which Adiprasito, Huh, and Katz prove in their paper. It implies the conjectures of Read and Welsh mentioned above, but is significantly more general because it applies to all matroids and not just representable ones. (June Huh likes to point out that, at least heuristically, one expects that 100% of all matroids are not representable.)

The Chow ring of a matroid

We briefly outline the strategy used by Adiprasito, Huh, and Katz in their proof of Rota’s conjecture. The first step is to define a Chow ring

associated to an arbitrary matroid

. The definition is due to Feichtner and Yuzvinsky, who noted that when

of the hyperplane arrangement complement associated to

. Although the definition of

is purely combinatorial and does not require any notions from algebraic geometry, it would presumably be rather hard to motivate the following definition without knowing something about the relevant geometric background.

be the poset of non-empty proper flats of

is defined as the quotient of the polynomial ring

by the following two kinds of relations. First, one sets

are incomparable in the poset

. Second, one declares that for every

the sum of the

equals the sum of the

are viewed as having degree one. If

is the rank of

, there is an isomorphism

determined uniquely by the property that

is a flag in

is realizable, one can use the so-called “Hodge-Riemann relations” from algebraic geometry, applied to the

whose complex cohomology ring is

to prove Rota’s log-concavity conjecture for

. This is (in retrospect, anyway) the basic idea in the earlier paper of Huh and Katz.

We now quote from the introduction to [AHK]:

While the Chow ring of

could be defined for arbitrary

, it was unclear how to formulate and prove the Hodge-Riemann relations… We are nearing a difficult chasm, as there is no reason to expect a working Hodge theory beyond the case of realizable matroids. Nevertheless, there was some evidence on the existence of such a theory for arbitrary matroids.

in a purely combinatorial way, making no use of algebraic geometry. The idea is that although the ring

is (presumably) not actually the cohomology ring of a smooth projective variety, from a Hodge-theoretic point of view it behaves as if it were.

In order to formulate precisely the main theorem of [AHK], we need a combinatorial analogue of hyperplane classes, or more generally of ample and nef divisors. The connection goes through strictly submodular functions. A function

are incomparable subsets of

gives rise to an element

The convex cone of all

associated to strictly submodular (resp. submodular) classes is called the ample cone (resp. nef cone). (Actually, the ample cone in [AHK] is a priori larger than what we’ve just defined, but this is irrelevant for the purposes of the present post.)

. However, one can also define

using flats; in particular, the cones of

of non-empty proper flats of

is the rank of

The main theorem of [AHK] is the following:

be a matroid of rank

be ample, and let

is positive definite on the kernel of

This is all in very close analogy with analogous results in classical Hodge theory.

To see why the theorem implies Rota’s conjecture, fix

be the sum of

be the sum of

do not depend on

, and are denoted by

is equal to the

coefficient of the reduced characteristic polynomial

are not ample, they belong to the nef cone and one may view them as a limit of ample classes. This observation, together with the Hodge-Riemann relations, allows one to deduce Rota’s conjecture in a formal way.

Strategy for proving the main theorem

. The actual proof is much too intricate to describe in this blog post. However, I will try to quickly give an impressionistic view of the argument.

of the same rank on the same ground set

, there is a diagram

where each matroidal flip preserves the validity of the Hard Lefschetz Theorem and Hodge-Riemann relations. (A subtlety is that the intermediate objects

are tropical varieties, i.e., balanced weighted rational polyhedral fans, but not necessarily tropical linear spaces associated to some matroid. So one leaves the world of matroids in the course of the proof, unlike with McMullen’s case of polytopes.) Using this, one reduces Rota’s conjecture to the case of the uniform matroid of rank

(whose rank function is given by

), in which case the conjecture can be directly verified “by hand”.

of positive real numbers is unimodal, i.e., there is a

. In particular, the main theorem of [AHK] implies that the absolute values of the coefficients of the characteristic polynomial of a matroid form a unimodal sequence. See this survey paper by Stanley for many other examples of naturally occurring log-concave and unimodal sequences in combinatorics.

2. The term combinatorial geometry from the title of [AHK] is another name for a simple matroid. (A matroid is called simple if every circuit has at least 3 elements, or equivalently, if the empty set and all singleton subsets of

are flats.) Every matroid has a canonical simplification, with the same lattice of flats

, and one can recover a simple matroid uniquely from

can be defined purely in terms of the lattice of flats, one can immediately reduce the main theorem of [AHK] to the case of combinatorial geometries.

3. We have already mentioned that the approach given in [AHK] to proving the Hard Lefschetz Theorem and Hodge-Riemann relations was inspired in large part by the work of Peter McMullen. It is also inspired by the approach to classical Hodge Theory pioneered by de Cataldo and Migliorini.

4. The main theorem of [AHK] is related to the counterexample to Demailly’s strong version of the Hodge conjecture for positive currents given recently by Babaee and Huh. Their counterexample is based on a tropical variety that satisfies Poincaré duality and the Hard Lefschetz Theorem, but not the Hodge-Riemann relations.

5. The proof of the Lefschetz theorem for locally matroidal tropical varieties by Adiprasito and Björner uses a deformation argument similar to the one used in [AHK].

12 thoughts on “Hodge Theory in Combinatorics”