What is the probability that two randomly chosen integers have no prime factors in common?  In honor of Pi Day, I’d like to explain the surprising answer:

The hero of this story is Leonhard Euler, who worked out this astonishing connection between prime numbers and

through a series of brilliant insights.  In the spirit of Euler, I will be rather cavalier about issues of convergence and rigor here, focusing on the key underlying ideas. 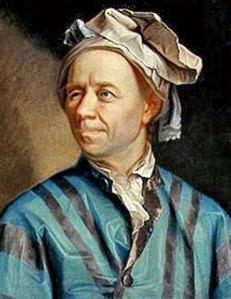 Let the probability in question be denoted

.  Euler’s first observation is that if

are chosen at random, the probability that they are both even is

, and so the probability that they are not both even is

.  Similarly, the probability that

are both divisible by 3 is

, so the probability that they are not both divisible by 3 is

are not both divisible by either 2 or 3 is therefore

Continuing in this way, Euler finds that

can be expressed as an infinite product over all primes:

Euler’s next step is to note that by the formula for the sum of a geometric series,

and therefore we can rewrite our formula for

as a formula for

Euler, in typically bold fashion, decides not to panic about all these infinities and just multiplies everything out term-by-term.  He notices that the leading 1’s in each parenthetical expression multiply out to give 1, the

.  In fact, Euler realizes that there is a unique way to obtain

for each positive integer

: use the prime factorization of

to read off which terms to multiply together.  For example, to obtain

from the first parenthetical expression,

from the third, and 1’s from everywhere else.  The terms which don’t involve choosing 1 all but finitely many times are neglible, according to Euler’s keen intuition (which is not hard to make precise with a bit of calculus that we’ll skip here).  Therefore:

Now calculating the value of the infinite sum

is a famous problem (often referred to as the Basel problem). Here’s how Euler solves it.

The Taylor series for

and so thinking of the Taylor series for

as an “infinite polynomial”, Euler obtains the identity

Now the right-hand side can be simplified, using the difference of squares formula

in both sides of the identity

which can be rearranged to give

Rest in peace, Euler.  And happy Pi Day to the rest of you! 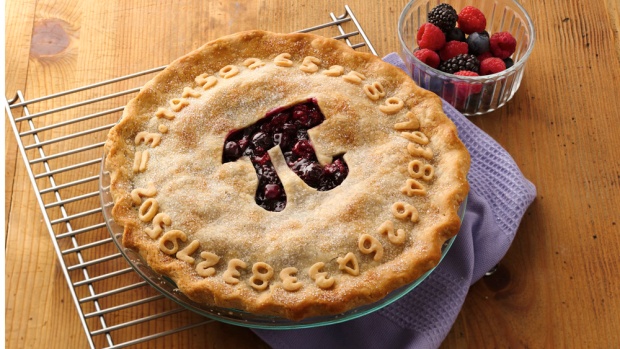 4 thoughts on “Probability, Primes, and Pi”