On Pi Day 2016, I wrote in this post about the remarkable fact, discovered by Euler, that the probability that two randomly chosen integers have no prime factors in common is

.  The proof makes use of the  famous identity

, often referred to as the “Basel problem”, which is also due to Euler.  In the 2016 post I presented Euler’s original solution to the Basel problem using the Taylor series expansion for

In honor of Pi Day 2018, I’d like to explain a simple and intuitive solution to the Basel problem due to Johan Wästlund.  (Wästlund’s paper is here; see also this YouTube video, which is where I first heard about this approach – thanks to Francis Su for sharing it on Facebook!)  Wästlund’s approach is motivated by physical considerations (the inverse-square law which governs the apparent brightness of a light source) and uses only basic Euclidean geometry and trigonometry.

Outline of the proof

A brief outline of Wästlund’s argument is as follows:

Step 1: Through some simple algebraic manipulations, it suffices to prove the equivalent formula

.  This, in turn, follows (setting

) from the following more general fact:

Theorem: For every real number

which is not an integer, we have

be even, and think of

(which without loss of generality we may suppose satisfies

on the real number line.  Place

stars of equal brightness on the number line, with one star at each integer (i.e., “lattice”) point of the half-open interval

.  Then by the inverse square law, we can interpret the partial sum

as the total apparent brightness at

Step 3: We may approximate (to any desired precision) the

.  We can therefore replace our system of

stars on a line by a system of

stars lying on some arc centered at

inside a large circle (like the blue dots in Figure 1).

, and measure the total apparent brightness

on the circle having distance

(measured along the circle) from the nearest star (see Figure 2).

Then the inverse square law implies that for

, “most” (in a precise quantitative sense) of this brightness comes from the

denote the total apparent brightness of the

equally spaced stars around the perimeter of a circle of circumference

, with the closest star at arc-distance

Step 6: By an elegant geometric argument related to the “inverse Pythagoran theorem” (see Figure 3), it turns out that for every

.  In other words, we can replace a system of

equally spaced stars along a circle of circumference

, tangent to the real line at

equally spaced stars along a circle of circumference

, also tangent to the real line at

, in such a way that the total apparent brightness at

This implies, by induction, that

for all natural numbers

.  Combining this with the previous step, we obtain

Step 7: In particular, if

is itself a large power of 2, then

Step 8: By elementary trigonometry, we have

, which proves the Theorem.

The crucial, and most innovative, part of the argument is the fact from Step 6 that

.  This is most easily explained for

, though the proof in the general case is essentially the same.  So let’s examine how Wästlund proves that

The argument is based on the “Inverse Pythagorean Theorem”, which is the assertion that in the setting of Figure 4 (where ACB is a  right angle), we have 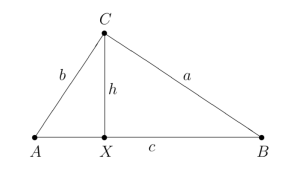 It is an elementary exercise to deduce this from the usual Pythagorean Theorem.

Given a single star (represented by the red point R in Figure 5) on a circle of radius 1, tangent to the real line at

, we can replace it by two equally spaced stars (the blue points

) on a circle of radius 2, also tangent to the real line at

, in such a way that the apparent brightness of the red star at

be the center of the smaller circle, and let

be the center of the larger circle.   Then

are the two points where the line

is a diameter of the smaller circle,

is a right angle.  The formula

expressing the equality between the apparent brightness at

in the red and blue star systems, will follow immediately from the Inverse Pythagorean theorem once we show that the (counterclockwise) arc-distance from

equals the (counterclockwise) arc-distance from

To see this, first note that

times the arc distance from

is equal to the measure (in radians) of the central angle

times the arc distance from

.  So it suffices to show that

.  This follows from the fact that

, which intercepts the same arc of the small circle as the central angle

By a similar argument, replacing each red star by two blue stars as in Figure 3 above, it follows that

In the base case

is a circle of circumference 1 (and hence radius

which are at distance

as measured along the circumference of

denotes the Euclidean (chordal) distance between

.  It is an elementary trigonometry exercise to show that

We now show that when

is approximately equal to

-star system along a circle of circumference

).  The total brightness at

, and consider the total brightness

stars.  Since each of the

deleted stars has distance at least

By a similar argument, if we begin with the

-star system on a circle of radius

and remove all but the closest

the total brightness of the remaining

On the other hand, it’s geometrically clear (since the radii of the circles approach infinity) that

By the triangle inequality, the difference between

gives, for any fixed

, but the general case follows easily from this).

This entry was posted in Uncategorized. Bookmark the permalink.